Showing posts from October, 2014
Show all

October 13, 2014
As my open source project (Violet UML Editor) has a GUI developed in Swing (wich is not a problem because I massively use the Graphics2D canvas which should be portable to other tehnologies), I sometimes have to find tricks to enhance UX. That was my last challenge. I decided to implement fade effects on image. After googlings, I didn't find anything ready to use. So, I developed a quick and simple piece of code I share with you. The idea is to embed my image as an ImageIcon attached to a JLabel. Then, to trigger fade effects, I just use a mouse listener. 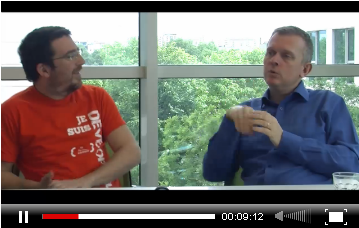 Rémi is one of my favorite Java superstars.
If you understand french, you should see this :
First partSecond partThird part